Lead me not into the temptation to use terrible puns to introduce the Jesus fella. END_OF_DOCUMENT_TOKEN_TO_BE_REPLACED

I can clearly see Jesus offering a woman who has had an abortion acceptance, love, forgiveness and hope. END_OF_DOCUMENT_TOKEN_TO_BE_REPLACED

We’re on a dangerous slippery slope regarding freedom of belief. END_OF_DOCUMENT_TOKEN_TO_BE_REPLACED

You have to believe in something unbelievable – that a man came back to life – to really get to grips with Christianity. END_OF_DOCUMENT_TOKEN_TO_BE_REPLACED

Taking a slightly different approach with oneweekinaugust.com today – with a warm welcome to my first guest writer, Lea Carswell.

Lea attended the Sydney Writer’s Festival the other month and specifically the session with social commentator Hugh Mackay. You may have seen the social media tweets when Mackay said: “Jesus never told anyone what to believe in. He only spoke about how to treat each other.”

I enjoyed her perspective, so I asked to publish what she wrote. It resonated because oneweekinaugust.com  was born from my coming to a (surprised and somewhat unwilling) faith in Jesus in my 40s – and my ongoing frustrations around how G,J &HS are lost in translation. These posts are my attempts to do what Lea encourages all Christians to get better at in her article: describing Jesus’ blueprint for Heaven and Earth. I hope you enjoy it, I did!

There was really no surprise, during his session at the Sydney Writer’s Festival, that social commentator Hugh Mackay made assertions contrary to what the Bible teaches and to what evangelical Christians believe. 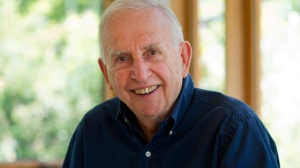 More surprising were the aspects of his view of Christianity (described as ‘his struggle with religion’) that he got pretty right.

Promoting his new book, Beyond Belief, Mackay said he had tired of the labelling around religious or spiritual belief and has decided to move away from the isms and ologies.

“Now when someone says ‘I’m a this’ or ‘I’m a that’, I say, ‘I don’t care what you call yourself. How does it affect the kind of society you want to live in? What are you doing to make that vision of society a reality?’”

That seems a very good way of describing what Jesus did, which was to portray his blueprint for society and to live that out in His own life. (In churches, we refer to that blueprint as the Kingdom of God – a multi-layered term that doesn’t always make much sense to people hearing it for the first fifty or sixty times.)

Raised as a fervent Baptist Mackay described his first 20 years as a world of complete certainty, leading to arrogance and prejudice.

“We opposed Anglicans for goodness’ sake because they baptised babies with little dribbles of water, instead of only adults in full immersion,” he said.

This kind of experience, coupled with the public shame of institutions finally being brought to account for sinful and abusive policies and practise, is not uncommon for Australians who have chosen a life without religion.

Mackay walked away from church, convinced by his own ‘reason’ that it was all false (the crowd smirked knowingly at this point) and that tenets of Christianity were no more than myths.

According to Mackay, “Even so, I came to realise that the myths of all the religions are full of significance. I can not believe the truth of the story but I see that there is a truth in the story.”

Whether we agree with him or not, the session raised questions that we should answer for ourselves and our churches, for the Glory of God.

Does our ‘certainty’ lead to arrogance or a freedom from fear of things that deny Jesus?

If national statistics are of any help, and Mackay certainly believes them to be so, then there is a clear disconnect between what people want to believe, what they like to think others believe, where they want to educate their children and what they actually do with their time, money and loyalty.

What does that disconnect look like in our own area? Why not buy his book and have a read? Why not get better at describing Jesus’ blueprint for Heaven and Earth?

Hugh Mackay appeals for ‘loving-kindness’ as the paramount shared value in our society; our path and destination regardless of our own spiritual or religious conviction. Great perspective. Loving-kindness showed itself most clearly on the Cross and in Jesus’ resurrection. Just a myth? I’m certain that it’s not.

You can read more of Lea’s writing at https://smashedpottery.wordpress.com/